Private Tour – 1to1 or your own group: 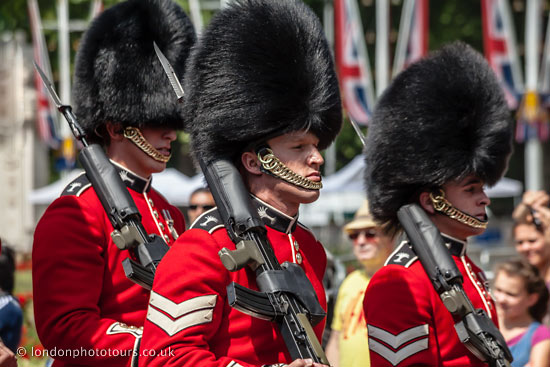 What could be better than photographing the outstanding Royal Heritage of London during ceremonial guard changes at Buckingham Palace and Horseguards Parade?  Let us show you how to take outstanding photographs of colourful Royal Traditions.

Learn how to capture the exhilaration of the colourful display of soldiers and horses as one group of soldiers is replaced by another, to defend Buckingham Palace.  Photograph marching bands as they make their way to the Palace.  Capture the flow of horseguards as they parade down the Mall.  This is an exciting extravaganza of royal tradition.

You begin by photographing the colourful and breathtaking Changing of the Guard at Buckingham Palace and take time to explore the Queen Victoria monument with its Commonwealth heritage. We then stroll through St. James’s Royal Park photographing wildlife in the park’s lake. It is then a short walk through Horse Guards Parade to Westminster, towering Big Ben and stunning Westminster Abbey. Marvel at the number of monuments in Parliament Square celebrating world leaders and historical charismatic figures.

Learn how to set your camera to capture the exciting parade of soldiers and horses.  Let us take you to the best viewpoints to photograph London Heritage and experience London through the eyes of professional photographers. Explore exciting compositions and subjects with a new and fresh perspective.

Changing of the Guard at Buckingham Palace generally takes place

Changing of the Guard at Horseguards Parade is daily

Meet near Victoria Station SW1E or Charing Cross Station WC2N
(If the Changing of the Guard should be cancelled for any reason, we will take in the equally colourful changing of the guard at Horseguards).