We are usually advised to not shoot towards the sun so this seems to me good reason to try it out.  First a few warnings – don’t look directly into the sun since it can damage your eyes and apparently it can also damge your camera sensor, so do avoid directly pointing at the sun when it is high in the sky.  If in doubt or scared then please don’t try it.

Normally one would use the light being in front of the camera to make a silhouette picture but in this instance here another way I like to use. You put something in the way of the sun (in this case a tree)  which stops your picture becoming a complete silhouette.  In another shot which had less tree-trunk it lost the edges of the tree to the white light so you are best to have the object obscuring the sun itself pretty much completely. 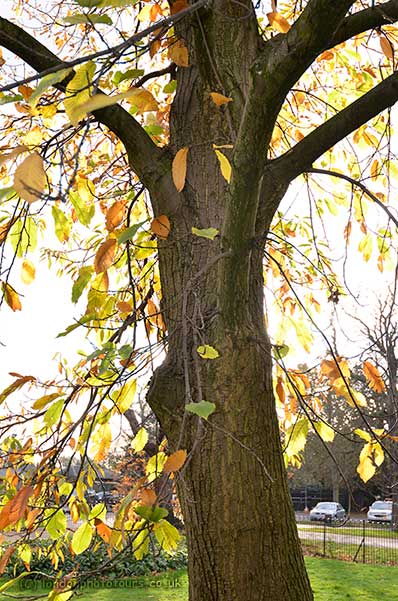 tree against the light with flash

Metering is mostly for  the tree which causes the sky to be very white: you can to experiment with exposure if you want the sky darker.

This was taken with a Nikon – I think that with a Canon camera the sky would have been darker so you should chose to let more or less light in according to taste and camera.  The ordinary exposure without compensation worked fine for me here.

I then used the cameras flash to expose for the tree and leaves –  without flash they would have been like a silhouette without much color. I like the way the further away leaves seem to disolve into the white light of the sky (aided by a short depth of field).

The combination of light sources has given the picture a strange kind of light which I like so I kept it.  Using RAW you could change the white balance to taste as you wish

Looking at it again I would like to blur out the cars in bottom right with software.

Why Is Shoreditch Famous?

The End – New Sculpture on the 4th Plinth